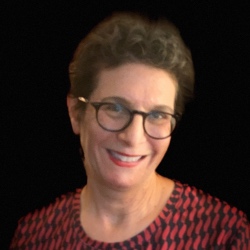 Amy Immerman is one of Cincinnati’s most active and well-known piano teachers, specializing in traditional and recreational lessons, children through adults . She holds a Bachelor of Arts in Psychology and a Master of Music in Piano Performance and Pedagogy from Ohio University. She is a Permanent National Certified Teacher of Music (NCTM). Immerman completed the entire Suzuki teacher training curriculum. She created, teaches and directs the adult recreational keyboard classes at Cincinnati Music Academy. She is one of the original co-founders of Cincinnati Music Academy.

Students who study with Amy have many opportunities to perform, engage with each other, and participate in evaluation and community events. Her students perform in three recitals annually, one of which is a collaborative recital with a drummer and bass player. Each student performs in their own personal piano trio!

Three times a year, students meet for group lessons to practice performing, and to get to know each other. Building and sustaining a sense of community is one of Amy’s strengths, both amongst her younger students as well as her large adult clientele. Regardless of age, people stick to an activity longer if they become friends with their contemporaries.

Amy Rose Immerman, National Certified Teacher of Music (NCTM), is co-founder and owner of the Cincinnati Music Academy, home to  over 40 independent music teachers! She teaches traditional and recreational lessons, and adult keyboard classes. She has a large adult student base, and truly enjoys working with students of all ages.

To keep her teaching fresh and current with new teaching trends, Immerman regularly attends music conferences and workshops. Through these conferences, Immerman knows many of today’s active piano composers and music publishers.

Immerman has held many leadership roles in the music community, including serving on the MTNA Board of Directors, East-Central Division Director, and State President of OhioMTA.  She served MTNA as manager of the eFestival, established in 2017. In 2011, she was chosen as the Ohio Certified Teacher of the Year, and was recognized nationally by her peers as an MTNA Foundation Fellow in 2013.

Immerman served eight years as a member of the College of Examiners of the Royal Conservatory of Music in Toronto (RCM), traveling throughout Canada and the United States to assess students taking RCM exams. She was instrumental in bringing RCM into Ohio, and served on its steering committee for many years. Many of her students participate in RCM’s nationally acclaimed piano and theory exams.

She is a frequent presenter at national, state and local conferences, universities, and local music teaching groups. She has given over 75 presentations, including  20+ national music conferences in 16 states and Canada.

Amy’s articles have been published in Keyboard Companion, Clavier Companion, American Music Teacher, OhioMTA News, and MTNA Overture. She serves as an adjudicator and coordinator for many competitions and events.

Immerman worked for years with the University of Cincinnati College-Conservatory of Music Piano Pedagogy Department mentoring graduate students in helping them prepare for successful careers in teaching.

She has consulted for the Frederick Harris Music Company, and was part of the core review group for the Christopher Norton ‘Connections‘ series. Frederick Harris published Immerman’s “Getting Started” guide for students entering the RCM program when it first became available in the U.S.

Immerman represented Yamaha’s “Passport to Music” program from 2004-2012 on Crystal Cruises, on which she taught piano classes at sea.

Her students have been frequent winners in MTNA and NFMC composition competitions, including multiple national finalists in the MTNA Composition Competition. Many of her students have received gold medals from RCM for attaining the highest score state-wide and earning First Class Honors with Distinction. Immerman’s students have regularly won scholarships from the RCM and Ohio Music Teachers Association, and have been selected to play in prestigious masterclasses and showcase recitals.

Immerman loves to share her passion for music, and strongly believes that everybody is capable of making music. Ability is second to motivation. If you want to learn, and you’re willing to make the effort, Immerman will guide you to be the best you can be. Her enthusiasm is contagious, and she has the patience of an angel!

Immerman has been cycling to work year-round since 2000, and was named “2008 Female Commuting Cyclist of the Year” by the Cincinnati Cycle Club.

What Amy’s Students are Saying…

Amy Immerman has been an amazing piano teacher for our daughter. Not only does she teach with joy and enthusiasm, but she inspires her students to set and reach goals.

Mrs. Immerman has a knack for giving feedback in an encouraging manner and she individualizes instruction to meet the needs of students. She offers the perfect balance of guidance and choice in selecting music that is challenging yet enjoyable to learn. Her organization and great skill allow Mrs. Immerman to make excellent use of each moment of class. She is highly regarded not only by students and their parents, but also by colleagues as she shares her skills with them at professional conferences, both as a presenter and continuous learner herself. The true interest Mrs. Immerman shows in our daughter as a musician and an individual has created a strong rapport between them. Our daughter looks forward every week to the time she gets to spend learning with Mrs. Immerman. We give our very highest appreciation and recommendation to Amy Immerman, piano teacher extraordinaire! -Robin V.

Being taught piano by Amy Immerman has been one of the best things in my life. Amy is a remarkable teacher and person.

I started taking lessons from Amy at age 70, and she has made playing the piano my favorite hobby. At every lesson I learn a myriad of things that one could not learn from self-taught books. She is incredibly knowledgeable and and willing to patiently share everything she knows. On top of all that, she is a wonderful and interesting person. I would give her an A++++ rating. -Susan D.

I’ve been studying piano with Amy Immerman for several years in both private lessons and in group classes. I can’t say enough about her skills in both settings.

She’s especially good at meeting the student where they are – whether at a beginning level or more advanced. Amy has taught me *how* to practice, and as a result, my playing had improved considerably. As a bonus, she regularly hosts events at the studio where students can play for each other (always volunteer, no pressure) which is a great way to work through public-playing nerves with a super forgiving audience! – Molly M.

Her professionalism, passion, patience and special teaching methods make us enjoy playing piano so much! My son appreciated her teaching very much! And he is so lucky to be Mrs Immerman’s student!

I’m 68 and have no musical talent, but I did have a realistic goal to learn some level of piano when I retired. So with that in mind I found Amy…

who I found to be kind, smart, compassionate & followed my leads and needs. And we had fun (she never laughed at me, only with me 🙂 learning to get fingers and brain to cooperate. So, while I definitely I can’t speak to learning Brahms or Rachmaninov, if you need a teacher for a new challenge, Amy is as good as they get. – Ed C.