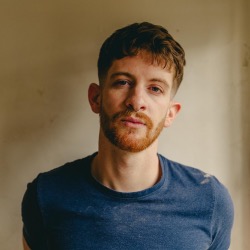 Nick Kelliher is a voice teacher based in Cincinnati, Ohio. Nick’s teaching style is a holistic one, where finding technical efficiency is key, so that artistry and expression may be easily accessed. In Nick’s studio, students will learn about concepts that are necessary for healthy vocal production that can be used across all styles, including classical, musical theater, jazz, and pop. Nick studies voice with internationally recognized baritone, William McGraw. Nick has also volunteered as a member of the UC Voice and Swallowing Lab. He is currently earning his Doctor of Musical Arts at the University of Cincinnati College-Conservatory of Music, where he also earned his Master’s Degree.

Nicholas Kelliher is also an up-and-coming countertenor. He was recently named a Semifinalist in the Metropolitan Opera Laffont Competition. He recently collaborated with the new works division of Santa Fe Opera, portraying the role of Jonathan in Gregory Spears’s The Righteous. In the 2021-2022 season, he sang Cardinal 1 in Philip Glass’s Galileo Galilei with CCM Opera. Additionally, he portrayed the Mysterious Interviewer with Cincinnati Opera Fusion: New Works and covered Oberon in Britten’s A Midsummer Night’s Dream as an Apprentice Artist at Des Moines Metro Opera. He was also an international finalist for the Jette Parker Young Artist Program at Royal Opera House Covent Garden. During the 2020-2021 season, he portrayed Man Under the Arch in Kevin Puts’s opera The Hours with Opera Fusion: New Works, in collaboration with Cincinnati Opera and the Metropolitan Opera. In the 2019-2020 season, he portrayed Arsace in Handel’s Partenope, and Third Spirit in Mozart’s Die Zauberflöte, both with CCM Opera. Nick was set to debut with the Atlanta Symphony Orchestra in the Summer of 2020 in their productions of Purcell’s Dido and Aeneas and Bach’s Weinen Klagen. During the 2018-19 season, he portrayed Endimione in Cavalli’s La Calisto with CCM Opera. Additionally, he sang the role of Orpheus’ Double in Matthew Aucoin’s Eurydice with Opera Fusion, commissioned as a workshop by The Metropolitan Opera and LA Opera, to much success. He was awarded the encouragement award at the Metropolitan Opera National Council auditions in 2018, 2019 and 2020, and was a National Finalist in the National Opera Association competition in 2020.