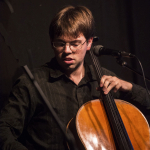 Michael G. Ronstadt (cello) is an adept multi-instrumentalist, vocalist and composer, captivating audiences throughout North America for over two decades. A master at his craft, Ronstadt traverses a mélange of musical styles that range from anywhere between folk, jazz, classical, Americana and the wildly ethereal. Nephew of Linda Ronstadt, Michael brings a rich musical heritage and absolute knack for improvising up a storm. He holds a masters degree in cello performance from the University of Cincinnati’s College Conservatory of Music (CCM) and a Bachelors of Music from the University of Arizona (Tucson, AZ).

Ronstadt displays genre-blending explorations on cello and guitar in complement to thought-provoking lyrics, as well as instrumental work. In addition to his solo and group recordings, Michael G. is a much sought-after studio musician, who has appeared on more than 200 albums in the last 20 years. Michael, who hails from his famous Arizona family, now lives in Cincinnati by way of Philadelphia, where he is a sought-after cello/guitar teacher and mentor. He also teaches cello as adjunct professor at Earlham College and Indiana University East and leads many workshops in the classical and non-classical realms. His wide array of musical flexibility and expertise truly reflects in his students who have worked with him over the decades, which hopefully gives them an upper hand in this music world which demands that musicians be multi-faceted and wildly creative in order to survive.