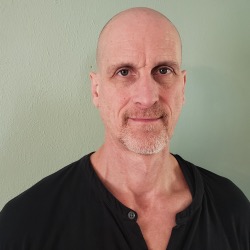 Michael Kotur has been a career musician for over 35 years. He was born into an extremely musical family. His mother began accompanying her church at age 12, and all 3 children received music scholarships. Michael studied piano from ages 6 to 13, and got his first guitar at age 15. After high school Michael went on the road with American Entertainment Productions, performing up to 10 shows a week and touring across the country for nearly 3 years.

Michael began receiving calls for gigs and recording sessions during his first years at Central State, which initiated his role as a professional session player of many musical styles. Michael has been an active part of the Dayton-Cincinnati music scene for the past 30 years, playing thousands of gigs and hundreds of recording sessions ranging from 30s-era jazz to neo-soul. Throughout these years, he maintained a robust teaching studio, at times teaching up to 65 lessons in a week. Since taking on his first guitar student in 1986, Michael has taught well over 70,000 music lessons.

Teaching has always been a passion for Michael and his love of teaching and performing has not diminished. Over the years, Michael has taught guitar, ukelele and bass. His most rigorous curriculum has enabled his students to receive music scholarships at the collegiate level across the country. Michael enjoys teaching students of all ages and teaches all common music styles. His teaching method accentuates individualism, allowing the student to create the core direction of the curriculum. He considers it his life’s work to help students reach their personal musical goals.