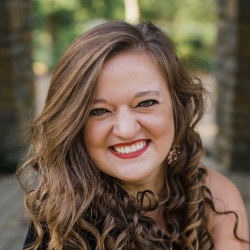 Irene Reising, a coloratura soprano from Cincinnati, OH, has been performing with multiple opera companies and has also been teaching private voice and piano since 2017. As a voice and piano instructor, Ms. Reising deeply believes in a healthy technique being the most important skill developed in lessons. Ms. Reising will work with her students to find appropriate repertoire to fit each student’s instrument. In her studio, the students will work on growing their confidence in performing and expressing themselves as a musician through appropriately deemed repertoire. The students will also cultivate an appreciation of music and gain a basic understanding of the fundamentals of music.

Ms. Reising graduated summa cum laude from Wittenberg University in 2017, where she received a Bachelor of Arts in Music (Voice). While attending Wittenberg University, Ms. Reising sang the roles of Marie in La fille du régiment, Zerlina in Don Giovanni, Adele in Die Fledermaus, Sophie in Werther, Yum-Yum in The Mikado, Susanna in Le nozze di Figaro, and Edith in Pirates of Penzance. Ms. Reising has also performed as the Soprano Soloist in Schubert’s Mass in G as well as Handel’s Messiah. Additionally, Ms. Reising studied piano all four years during her time at Wittenberg University under the direction of Dr. Christopher Durrenberger. Since graduation, Ms. Reising has been involved with numerous opera companies, including but not limited to Cincinnati Opera, Opera Columbus, Opera Birmingham, Toledo Opera, Peach State Opera, Opera Naples, and Opera Project Columbus. Ms. Reising has covered the role of Musetta in Puccini’s La bohème with Toledo Opera as well as Peach State Opera. In 2019, Ms. Reising performed the role of the Saloon Girl in The Ballad of Baby Doe with Toledo Opera. In 2020, Ms. Reising was previously scheduled to be performing in Opera Birmingham’s production of Massenet’s Cendrillon, performing the role of Spirit #3 and covering the role of Noémie, however, due to COVID-19, the production was canceled. Additionally, in 2021, Ms. Reising was previously scheduled to be covering the roles of Hanna Glawari and Valencienne in Toledo Opera’s production of Lehar’s The Merry Widow; however, due to COVID-19 the production was canceled. Other operas include Il Trovatore, Carmen, Suor Angelica, Roméo et Juliette, and Tosca. In 2021, Ms. Reising won first place in the Charleston International Winter Music Competition. Ms. Reising will be singing with the Cincinnati Opera in the upcoming 2022 Summer Season. Ms. Reising has been studying with Paul McCready at the Cincinnati Music Academy since 2012.