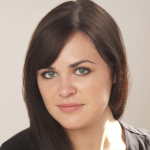 Erin Carr is an actor and singer who moved from the Midwest to the East Coast to attend New York University’s Tisch School of the Arts where she received her BFA in Acting. While at NYU, she trained at the Experimental Theatre Wing, where she created and mounted original pieces. Through her training at NYU, Erin not only had the chance to work with legendary professionals but also new groundbreaking artists.

Erin went on to study theatre at CCM’s preparatory department in their two-year acting certificate program. Since then, she also had the opportunity to travel across the Atlantic to train in Dublin, Ireland more than once, as well as perform in the International Fringe Festival in Edinburgh, Scotland. Favorite roles throughout the past several years include Carol in Oleanna, Catherine Givings in In The Next Room…, Chaplain in A Clockwork Orange, and Sara in Stop Kiss, performed in the Philadelphia Fringe Festival. She has recently had her directorial debut working on the staged workshop production of The Breakfast Club with Cincinnati Actor’s Studio & Academy.

She is effervescent, brave and imaginative. Her creative goals are to explore and express the range of human experience through all artistic mediums. Erin enjoys working on the stage, in front of the camera and in the classroom. At the moment she is working as a full-time teacher with the Cincinnati Actor’s Studio & Academy where she teaches various advanced physical acting techniques. She is also an adjunct teacher at Miami University at Oxford where she teaches Experiencing Theatre as well as Acting for the Non-Major. When time permits, Erin travels around the U.S. teaching with the Educational Theatre Association and the International Thespian Society. She is also an Advanced Actor/Combatant proficient in the primary eight weapons regulated by the Society of American Fight Directors; she knows her way around the hilt of a sword and always loves a good knife fight!

Along with performing, directing and teaching, Erin is also the Co-Artistic Director of ReVamp Collective based in Philadelphia: www.revampcollective.com