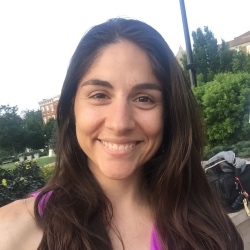 Maria Zarick has been teaching professional voice and piano since she graduated from Ohio State University in 2013. She believes it is important for all singers to have a well rounded exposure to musical genres in order  to develop a vocal style that is most closely aligned with their musical interests. Maria’s goal is to help students learn how to sing in the genre of their choice in the healthiest and most efficient way possible. In addition to voice, she has over 15 years of piano experience and incorporates her accompanying skills into all voice lessons. Many of Maria’s students have found opportunities to perform in various regional venues. Her students have been cast as leads in community and high school musical productions, as singing improvisers in musical comedy skits, as choristers in choirs and just for fun at karaoke bars!

Maria understands the importance of honing your vocal technique in all genres of singing, especially the newer pedagogical field of pop, and encourages cross-training (studying repertoire in more than one genre) for any serious singer. To complement her undergraduate training in classical technique, Maria took a vocal instructor certification class studying the pedagogical techniques of pop style singing with The New York Vocal Coaching Company led by Justin Stoney in 2016. She is currently studying with CMA alumnae and CCM graduate, Sarah Folsom and teaches in all genres, to all ages and levels.

Maria was proudly born and raised in Cincinnati and has always had a passion for connecting with others through music. She briefly left Cincinnati to attend Ohio State University where she received her Bachelor of Music in Vocal Performance. While there she performed in many choirs, including both the top classical choir, Chorale, as well as music directing, arranging and singing in a pop/rock a capella group, Dynamic Contrast. During her college career she starred in several musical theater productions, most notably as Eve in Children of Eden and Peggy in Godspell.

Upon graduating with an array of vocal genre experiences under her belt, Maria decided to steer her efforts into the pop/rock/jazz/blues genre performing in several rock cover bands including The Phil Am Band in Columbus and as the lead singer of Maria and the Freeboys in Cincinnati.

Maria typically hosts two recitals a year-one in the spring and one in the fall and loves attending concerts and shows of her students whenever she can! She is very excited to join forces with the faculty and students at CMA to create meaningful musical experiences in the Cincinnati area.

Cincinnati Music Academy is accepting new students for in-person and virtual lessons. Lessons are available 7 days a week for children and adults. You can close this window to read about our lessons or contact us below.