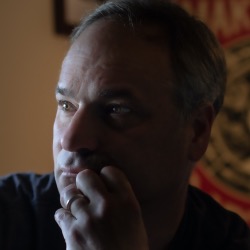 A native of Cincinnati, Christopher Schaljo brings his talent and pedagogy to CMA after 25 years of teaching and performing in New York City, across the US and Europe. Christopher is a graduate of SCPA and a member of Richard Miller’s studio while at Oberlin Conservatory. There he obtained his B.M. and M.M. in opera and voice. While at Oberlin, Christopher helped to build Otto B. Schoepfle Vocal Arts Laboratory, the first laboratory of its kind to be incorporated into a program of vocal instruction in the United States.

Teaching has always been a part of Christopher’s ongoing musical career. Whether it’s coaching voice, piano, or acting at Oberlin, in NYC, at American Music and Dramatic Arts, AMDA, and privately in NYC and Cincinnati, Christopher has helped many aspiring and working performers. Christopher has been taught in the bel canto school of thought, or more precisely, his pedagogy is based upon the method of singing developed in Italy in the 17th and 18th centuries that emphasizes beauty of tone and technique. Virtuosity and beauty of tone remain paramount in singing today, whether it’s opera, jazz, pop or musical theatre. Not everyone can be an opera singer, not everyone can sing R&B. That being said, the goal in Christopher’s studio is to build a foundation and repertoire with new and beginning students dedicated to their interests and the natural singing proclivity. For those who have experience, healthy instruments, and some solo, choral, or other theatrical musical experience, the goals will be to continue to promote healthy singing, develop new repertoire and promote and further engagement in professional and/or amateur musical productions. Christopher is active in the National Association of Teachers of Singing, and a member of Actor’s Equity Association.

Christopher has performed under the baton of maestro’s Seiji Ozawa, Bob Spano, Leonard Bernstein, Anton Coppola, James Levine, Randall Thompson, and many others. He has also conducted as musical director/pianist for off-broadway and regional broadway houses in and around NYC. Christopher is also an accomplished pianist (and church organist). He has performed with his trio as a jazz band leader and playing for a wide range of clientele including staff members of various presidential administrations, private concerts, cruise lines, clubs, cabarets, and sing-a-long venues. As a rehearsal pianist he has played for ballet lessons, voice lessons, broadway auditions, and many other venues.

Whether you want training for yourself, or for your child, Christopher will always provide coaching that is productive and fun. Cantiamo insieme!