Grace (left) received a score of 92 on her Level 6 practical exam for piano. To give a reference, the national average for Level 6 is 77 with only 2% of candidates scoring above 90.  In order for her to be awarded this honor, she had to score above 80 on the accompanying theory test in the same calendar year.

Jonathan Hu (below) received a score of 92 on his Level 3 practical exam for piano. The national average for Level 3 is 79 with only 2% of candidates scoring above 90.  Jon is scheduled to take his Level 4 exam in December.

Grace is 14 years old and in 9th grade at Cincinnati Hills Christian Academy. She has been studying piano with Amy Immerman at Cincinnati Music Academy for 11 years. Grace is often seen in the hallways at CMA where she also studies voice with CMA Co-Owner Paul McCready, and Acting with Gina Cerimele-Mechley. 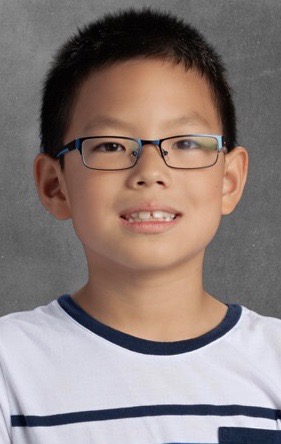 Jonathan is 7 years old and in second grade at Madeira Elementary School. He likes to swim and play football.  He has 1,469 consecutive practice days to date! Jon started lessons at age 3 with Amy Immerman, and transferred to Richard Van Dyke this past spring.

These awards are an exceptional distinction and are the result of the invaluable support
and inspiration that both parents and teacher provide! And of course, this high honor would not be possible without the commitment to excellence that both Grace and Jonathan apply to their music studies.

Congratulations to Grace and Jonathan for this outstanding achievement!